The State of Sustainable Business 2019: Toward a Critical Decade

When BSR launched its first State of Sustainable Business survey with GlobeScan in 2008, it would have been inconceivable for influential corporate leaders and major investors to engage in a very public, candid, and existential conversation questioning the future viability of capitalism, the foundation of our economic and social systems for the past three centuries.

Fast forward to 2019: We see influential CEOs declaring that “capitalism as we know it is dead” and calling for a new capitalism that values purpose alongside profit. The CEOs of the Business Roundtable have essentially called for a redefinition of the purpose of a corporation, embracing a form of “conscious capitalism” in which the need to deliver value to all stakeholders has surpassed the previously unchallenged primacy of shareholders.

These are welcome and long-overdue conversations and developments and provide a particularly compelling backdrop for us to unveil the findings of our 11th annual State of Sustainable Business survey, which includes responses from business leaders representing 125 global companies—half of BSR’s global membership network. As it has been since its launch, the survey features the perspective of the business leaders who do sustainability work daily inside some of the largest and most influential companies in the world.

This survey is also our last before we move into the 2020s, and as many companies had sustainability strategies with a 2020 end date, we wanted to find out how our members think they fared. More than half of BSR companies surveyed reported having a sustainability strategy with a 2020 end date or milestone, but only 45 percent of those said they considered their company to have achieved a great deal of success in reaching their objectives—which suggests we are off track to achieve global sustainability targets.

We need business to dramatically increase its sustainability ambitions over the coming decade.

Given the urgency of bending the curve on emissions and lifting communities and people out of poverty while supporting fundamental human rights, the message here is clear: We need business to dramatically increase its sustainability ambitions over the coming decade.

Furthermore, to truly achieve the sustainable change we need, significantly more effort must focus on a company’s value chain. Half of respondents say their efforts to address sustainability within supply chains have been ineffective—though they report being more effective in cases where they have been able to apply new technologies like blockchain.

One of the more interesting findings was that while a majority of companies plan on embedding sustainability more deeply into the business, less than half will be emphasizing long-term value creation, and fewer still are focused on trying to influence policy-making frameworks.

While about half of companies report a “fair amount” of focus on public policy across all issues, with human rights and climate change drawing somewhat more attention than inclusive growth and women’s empowerment, we do see an opportunity for companies to make it more of a focal point. Given the significant business influence over policy frameworks and the urgency of achieving sustainability goals, we hope to see more companies speaking out strongly on these vital issues.

Overall, 66 percent of companies say that sustainability is at least fairly well integrated, exactly the same as it was in 2016. Integration of sustainability into strategic planning and into products and services is being pursued by only about half of the companies surveyed.

As we move into the 2020s, the survey also revealed that climate change, ethics and integrity, diversity and inclusion, and human rights remain the top sustainability priorities for companies.

However, in 2019, climate change has emerged from the pack, making a significant jump with more than 50 percent of respondents citing it as a “very significant” priority over the coming year. Company leaders exploring how they can move toward net-zero carbon emissions, while also assessing their climate risk scenarios, are no doubt also well aware of the increased sense of urgency expressed by scientists and other experts and the surge of public demonstrations demanding urgent action to limit global temperature rise to 1.5°C. 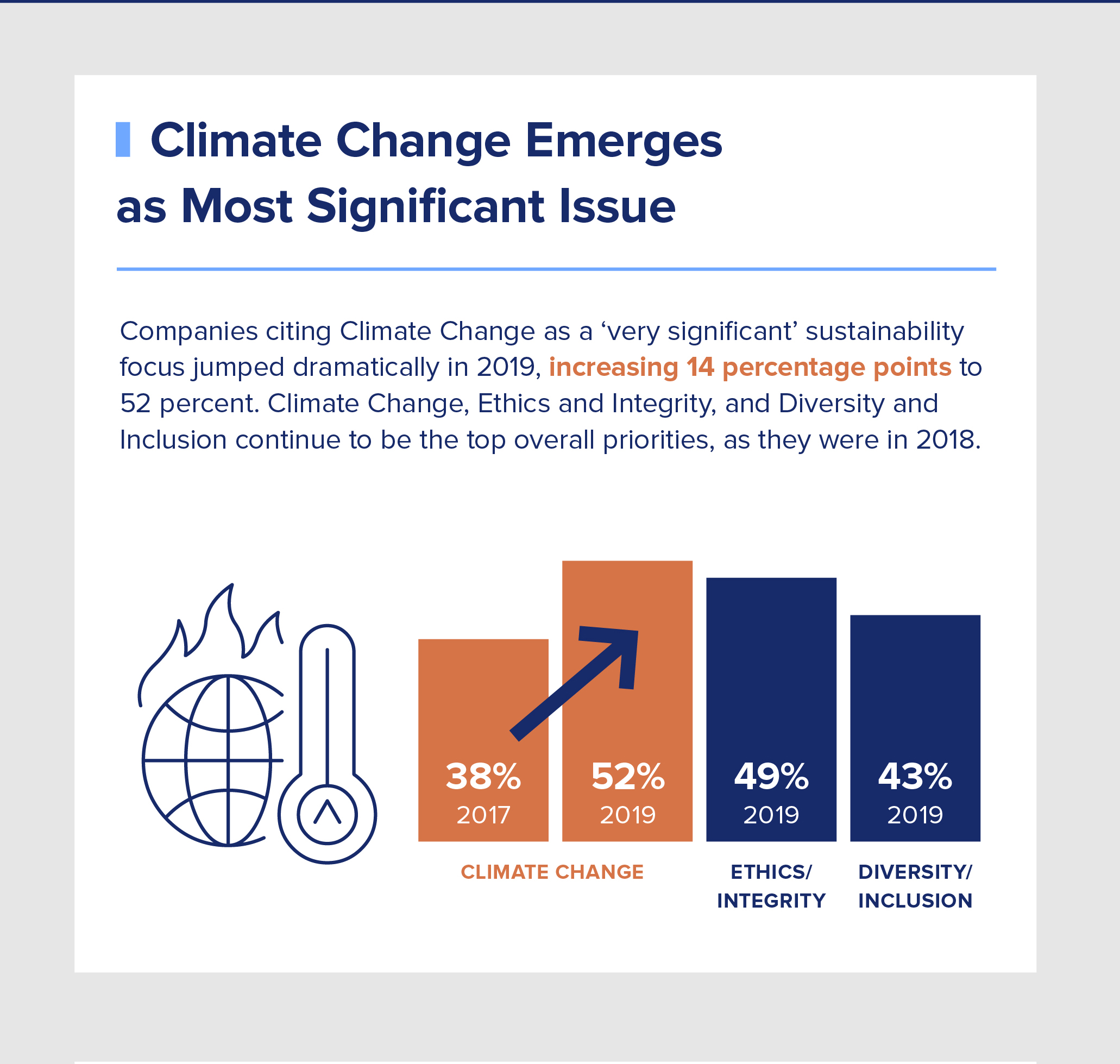 It is worth noting that despite its ranking as a top corporate priority, the survey reveals minimal movement in the number of companies setting an internal price on carbon.  Only 31 percent of companies either already have, or are moving to implement, an internal carbon price. In addition, only one-third of companies say they are focused on managing climate change through tier-2 suppliers and supply chains. Most businesses with science-based targets will need to address these emissions as part of the global effort to bend the curve on emissions and limit global temperature rise to 1.5°C.

Companies are becoming more interested in deepening their relationship with stakeholders.

Finally, we were heartened to discover that companies are becoming more interested in deepening their relationship with stakeholders. As we noted in our report, Five Steps to Stakeholder Engagement, earlier this year, we are living in an era of increased investor interest, widely accepted international agreements, heightened public transparency, and a digital media environment in which information is shared at lightning speed. Stakeholder engagement is more important than ever, and the fact that companies are taking it seriously is good news indeed.

We will be looking forward to connecting with our own stakeholders, including our members and other partners from business, civil society, and the broader sustainability community, at the BSR Conference 2019 in San Jose this week, where The New Climate for Business will take center stage. We’ll discuss our common challenges, and the opportunities for stepped-up corporate action on sustainability as we prepare for the critical decade of the 2020s.

Laura is a global expert on corporate sustainability, with two decades of experience in strategy consulting and has advised senior executives at global companies across a range of industry sectors and sustainability issues. Laura has also been a leader in BSR’s organizational growth and impact. She launched BSR’s financial services practice and New York office, and she is currently the Chief Operating Officer,… Read More

David leads BSR’s communications and marketing initiatives, working with a global team to amplify the organization’s mission and showcase its activities, impacts, and thought leadership to members, partners, and the wider business and policy community. David previously worked for The B Team, a group of global business and civil society leaders working to catalyze a better way of doing business for the… Read More

The divisions caused by “The Great Fragmentation” are a barrier to achieving an economy that drives equitable and sustainable progress. ﻿To meet the needs of our fragmented world, business can reorient their efforts around four main objectives.

BSR Response: How the EU’s Sustainability Reporting Standards Will Be a Game Changer

How IFRS Sustainability Reporting Standards Can Contribute to Further Harmonization

﻿BSR welcomes and has responded to the International Sustainability Standards Board (ISSB)’s two exposure drafts released in March 2022, grounding our comments in 30 years of experience working with member companies.

The world is fragmenting politically, economically, environmentally, and culturally. BSR President and CEO Aron Cramer shares ﻿the six interlocking factors that are accelerating fragmentation and why they're significant for business.

A Business Approach to Reinforcing Democracy

More than 80 percent of business leaders see threats to democracy as threats to business. What can business do?

After considerable momentum, there is now a backlash against elements of the sustainable business agenda. BSR President and CEO Aron Cramer discusses some of the big questions raised.

Activating Directors on Sustainability: Six Questions for Your Board

BSR™ is a sustainable business network and consultancy focused on creating a world in which all people can thrive on a healthy planet. With offices in Asia, Europe, and North America, BSR™ provides its 300+ member companies with insight, advice, and collaborative initiatives to help them see a changing world more clearly, create long-term value, and scale impact.